Cellulose, a linear polymer of glucose molecules, is the most abundant biopolymer on earth. It forms the major component of plant cell walls where it confers stability to the cell to allow growth based on internal pressure. Bacteria, mainly Gram-negative species, also form cellulose when transitioning from growth in solution to a sessile form (biofilms). We seek to determine the diverse mechanisms of cellulose biosynthesis in bacteria and plants. While most bacteria produce so-called amorphous cellulose, plants organize the cellulose polymers into cable-like structures, termed cellulose microfibrils, that are wrapped around the cell to form the load-bearing wall component.

Using structural biology, super-resolution fluorescence microscopy, as well as molecular and glycobiology, we aim to observed cellulose synthases 'at work' and delineate how cellulosic materials are assembled into composite materials on the cell surface. 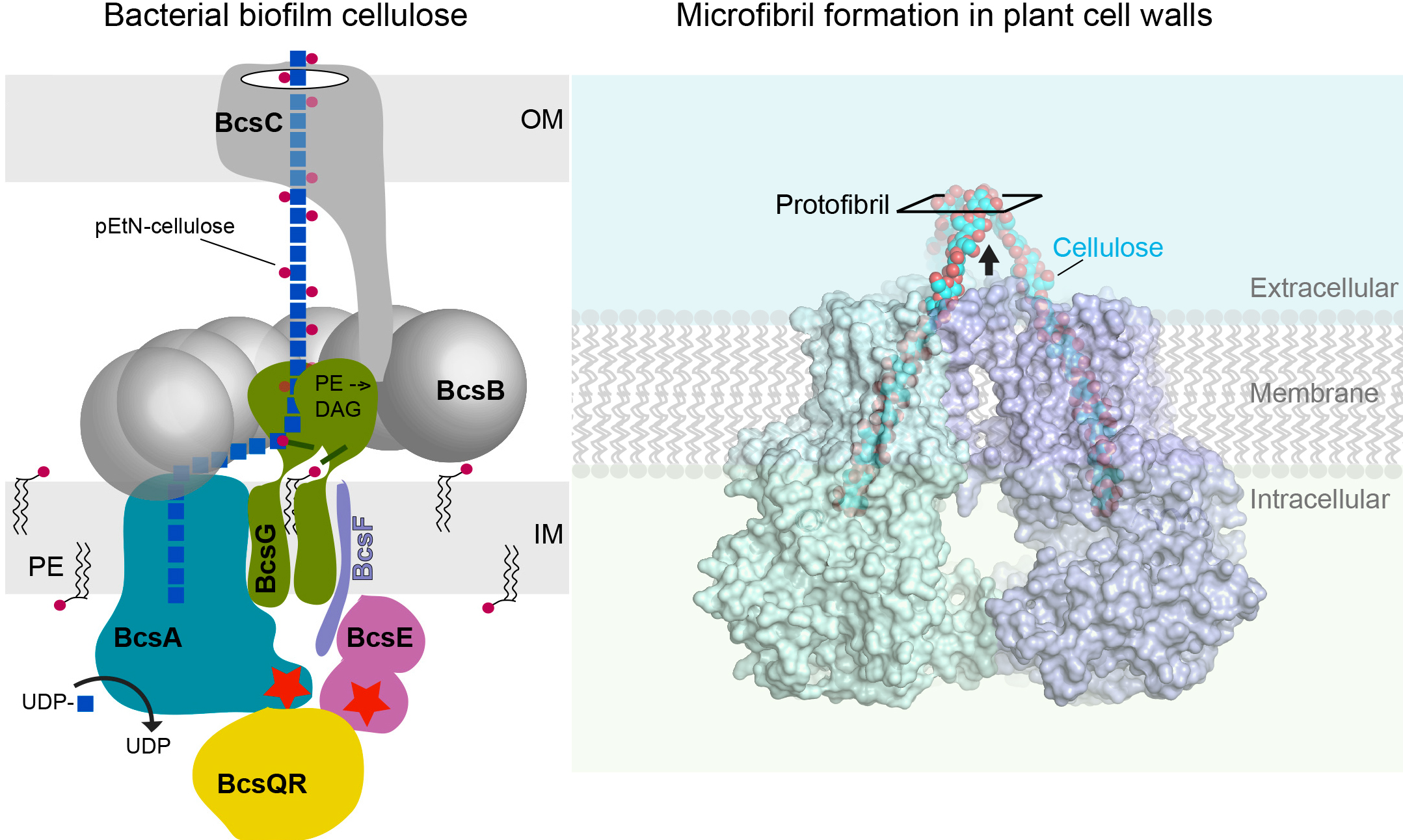 Hyaluronan (HA) is a major and essential component of the extracellular matrix in vertebrates and affects many physiological processes, such as cell adhesion and migration, cell differentiation, and proliferation. HA is a linear polysaccharide consisting of alternating glucuronic acid and N-acetylglucosamine units and can reach several microns in length. In eukaryotes as well as in some Gram-positive pathogens, the polymer is synthesized by membrane-embedded hyaluronan synthase (HAS). HAS synthesizes HA and translocates the polymer to the cell surface. We seek to determine the mechanism by which HAS accomplishes these tasks and controls HA polymer length.

HAS is a bifunctional glycosyltransferase that polymerizes UDP-activated glucuronic acid and N-acetylglucosamine linked via beta-1,4 and beta-1,3 linkages, respectively. Similar to cellulose synthase, the enzyme secretes the synthesized high molecular weight polymer across the plasma membrane during biosynthesis. Left: Our most recent cryo EM structure of HAS bound to a carbohydrate primer (see Maloney and Kuklewicz, et al., Nature 2022). Right: Membrane-integrated bacterial HAS likely operates by a fundamentally different mechanism. The enzyme also integrates polymer synthesis with translocation, yet functions as an obligate dimer that produces UDP-linked HA.

O antigens are complex carbohydrates that represent the variable regions of lipopolysaccharides in the outer membrane of Gram-negative bacteria. The polymers form extended barriers around many pathogens to reduce the efficacy of their hosts' innate immune responses. LPS molecules are assembled in the periplasm by ligating the O antigen to the lipid-A core. How the O antigen reaches the periplasm and is transferred to the lipid-A core are important unresolved questions. We are interested in studying the so-called ABC transporter-dependent pathway in which high molecular weight O antigens are transported across the inner membrane by a channel-forming ABC transporter, called WzmWzt.

ABC transporter-dependent O antigen biosynthesis. Left: O antigen polymers are assembled on undecaprenyl-phosphate lipids in a multi-step process. In some cases, the completed polysaccharide is chemically modified at its non-reducing end (black star). This modification is recognized by the associated WzmWzt ABC transporter. WzmWzt reorients the lipid-linked polymer in the inner bacterial membrane after which the O antigen chain is transferred to the lipid-A core. Right: Recent cryo EM structures of WzmWzt in open and closed conformations.